Station Controllers provide remote monitoring and control of your radio station, remote radio site or any other critical assets.
The SRS Station Controller is currently in beta testing at several sites.  The pictures below show some of the beta site deployments and hardware boards that have been designed so far.

APPLICATION - RADIO SITE MONITORING AND CONTROL
Managing critical assets at remote sites is difficult, time consuming and expensive.  Knowing the current health, or even more important, the status of equipment that is degraded or has failed is critical.  You can easily spend a whole day just getting to a remote site.  Wouldn't it be great if you knew before you left, what the failure was?  Did the power supply fail?  Did the PA on the transmitter fail?  Did the antenna system fail?  When a remote radio installation is degraded or off the air, it's hard to know what the problem is.  Even better, it would be great to get an early warning when things start to fail.
SRS Station Controllers can tell you the current state of your critical assets including repeater systems, wireless internet systems, solar power and battery systems, HVAC units, door security, RF power and other critical measurements.  You can also remotely actuate relays to change the site's configuration or turn equipment on and off.

APPLICATON - STATION MONITORING AND CONTROL
In today's modern radio room, you typically have several radios, antennas, power systems, amplifier and other radio accessories.  A station controller lets you centralize the control and monitoring of this equipment.  The control point could be a physical button panel at the operating position, a soft panel on a PC screen, a scheduled event or remotely controlled over the internet.  At the flick of a button, your entire station come to life, you can switch radios and antennas or turn specific equipment on and off.  You can also monitor critical station status including AC power on/off, DV voltages, RF power, etc.

HARDWARE ARCHITECTURE
The SRS Station Controller has been designed in two form factors.  One form is based on the same modular 3U card rack that we use in our repeater controllers.  This makes it easy to integrate a station controller in a commercial site, at the dispatch center or at home.  The modular architecture allows you to build up your system over time by adding the modules you need.  You can mix and match any combination of available modules or even design your own.
The second form factor is a single integrated circuit board that hosts the Raspberry Pi, Arduino and peripheral connections.  This complete station controller on a board nicely fits in a shallow 1U rack mount chassis.

SOFTWARE ARCHITECTURE
The master control processor is a Raspberry Pi running Rasberry PI OS.  We publish the communications protocol to allow you to develop your own applications in any programming language you like or use one of our sample applications written in Node Red or Python.

AVAILABILITY
The SRS Station Controller is currently in beta at several sites.  We will update you on this web site as we make progress and the controllers become available.
BETA HARDWARE PICTURES 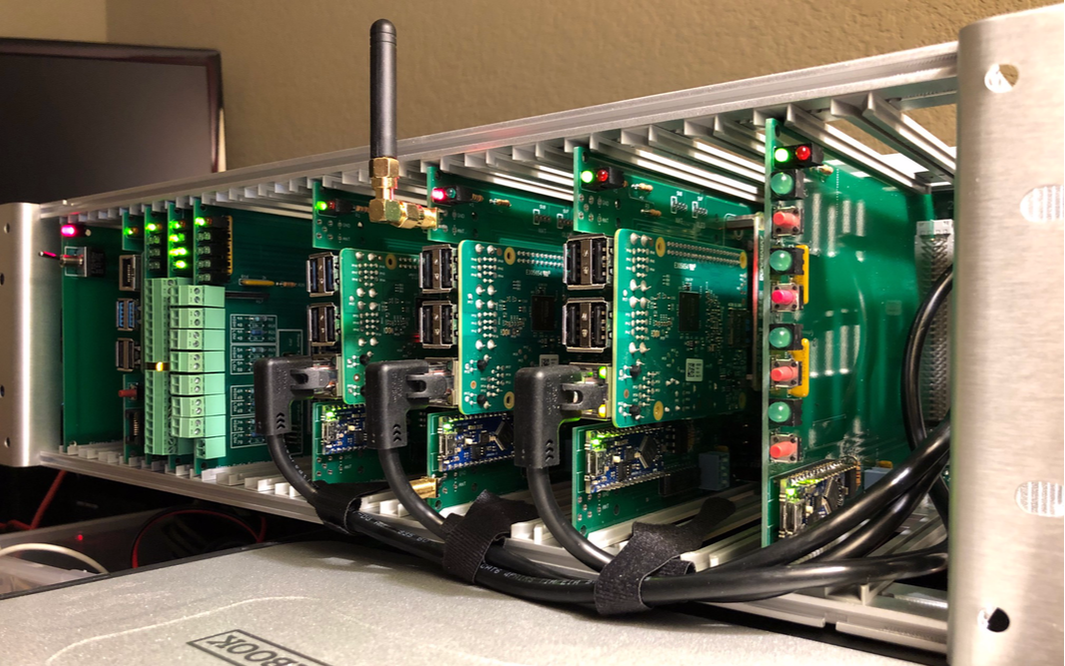 MMDVM Host Adapter Board
This board combines a Raspberry PI and local power supply with an MMDVM digital voice modem/radio board.  In addition there is a local processor on board that is used to remotely control power to the Raspberry PI and MMDVM boards.
SINGLE BOARD STATION CONTROLLER - VERSION 1 PROTOTYPE
This is the prototype version of the single board station controller.  Features include: External communications includes wired and wireless DCN (Device Control Network) enabling connections to several external devices such as remote coax relays, power control relays, watt meters, etc.

SINGLE BOARD STATION CONTROLLER - VERSION 2 FINAL PRODUCTION VERSION
In the final production version the board was made larger, major components were moved around and the board was completely re-routed.
This is the final production version of the single board station controller.  Features include: PLUS ADDED FEATURES ... External communications includes wired and wireless DCN (Device Control Network) enabling connections to several external devices such as remote coax relays, power control relays, watt meters, etc. 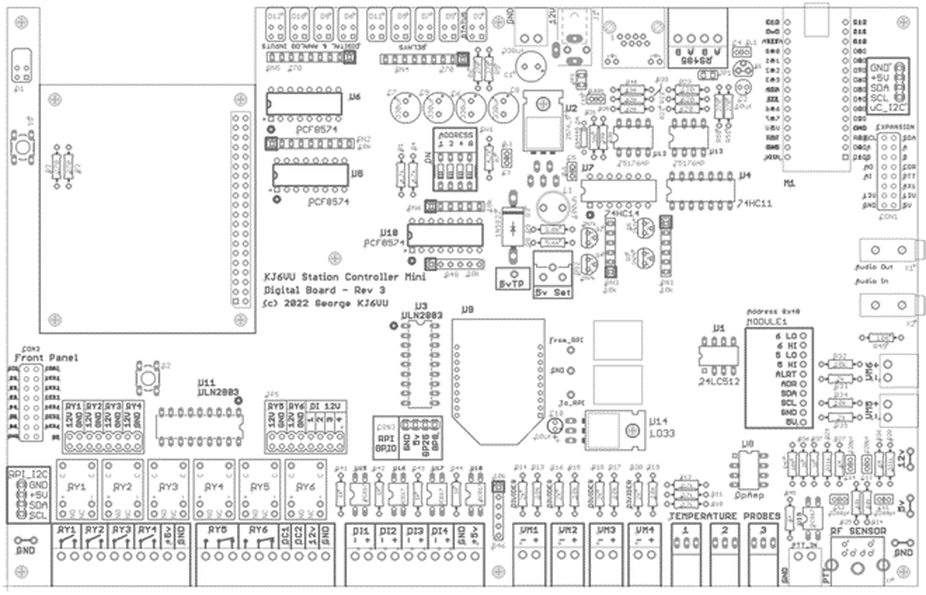 WEB CONTROL PANEL
The station controller can be controlled by a web based user interface developed in Node Red providing control of all relays and monitoring voltages, temperatures and digital inputs. 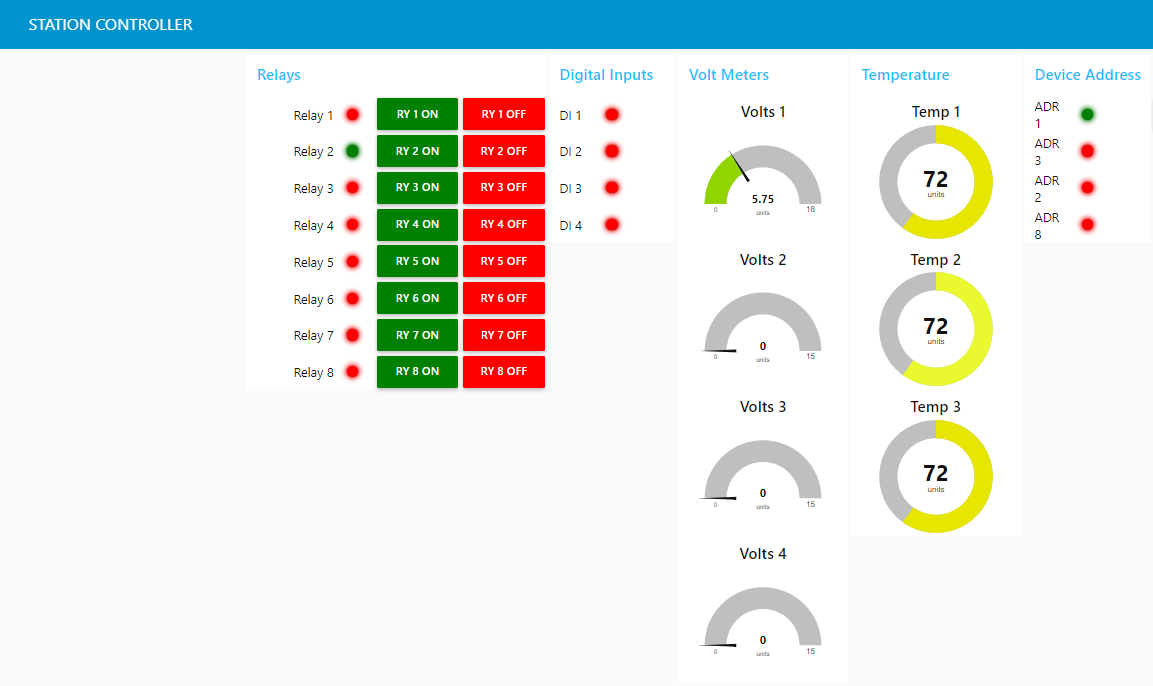 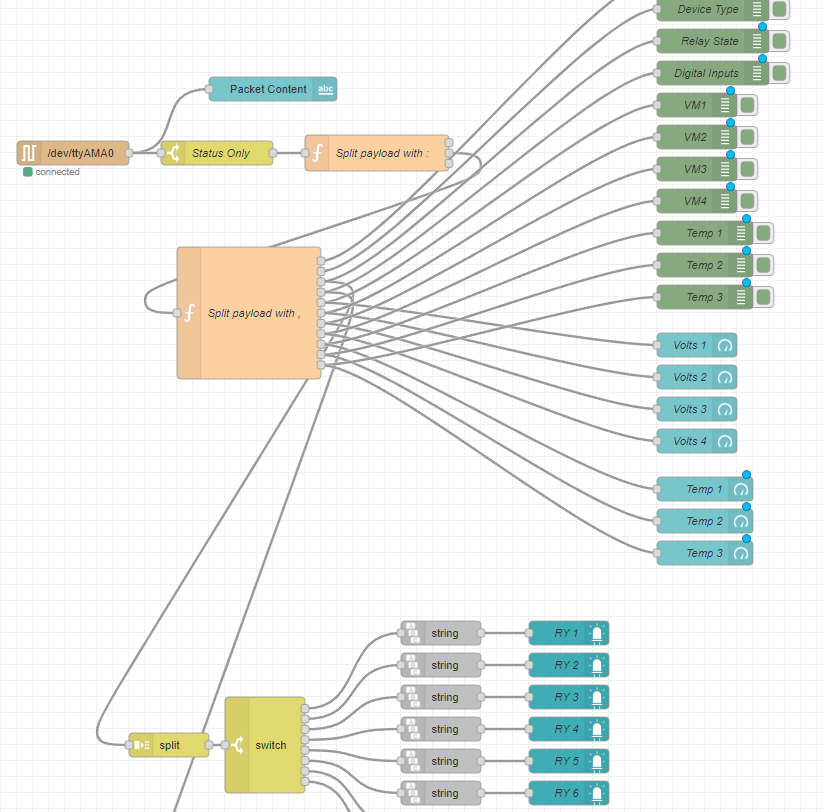